This tutorial covers the following parts of Magic and Hyperlambda.

This is one of those oddball things you’ve probably never seen before, arguably turning your Magic server into a crypto wallet and a financial transaction server, by allowing you to securely execute Hyperlambda code created by a 3rd party client - And have receipts giving you a guarantee of that the executed code was in fact created by one specific client. In many ways, it could be argued that this creates a “blockchain” type of technology for generic HTTP lambda invocations, providing code to your server, that you can securely execute, while getting a cryptographic receipt of that the code that was executed was indeed created by a specific client.

The internals of the process

If we start out imagining a client creating a Hyperlambda invocation to another server the process becomes as follows.

If any of the above steps are failing for any reasons, the execution is not considered to be successful. Fail conditions might include for instance.

This allows you to exchange public keys with another Magic server, and/or your own Magic installations, associate an authorisation object with the other party’s public key, for then to have the owner of that key create Hyperlambda code that your server securely executes - Arguably “reversing the responsibility of code”, where the server is no longer responsible for declaring its code, but rather the client provides a lambda object that your server executes. We refer to this as IoC on code declaration, because it becomes the equivalent of “inversion of control” in regards to who gets to decide what code to execute. The core of this feature is a dynamic slot called [magic.crypto.http.eval]. This slot requires two arguments; A [url] argument, and a [.lambda] argument, that will be serialised as Hyperlambda and transmitted to the specified URL, and executed on the server. In addition, there exists a PATCH HTTP endpoint with the relative URL of magic/system/crypto/eval-id that is responsible for executing the specified Hyperlambda on the server side.

Use the “Eval” menu item from your Magic Dashboard and execute the following code.

Notice - You might have to change the port number in the above snippet depending upon whether or not you’re running Magic through its Docker images or not. If you open your “Crypto” menu item afterwards, and you expand the “Receipts” tab, you will see something resembling the following. 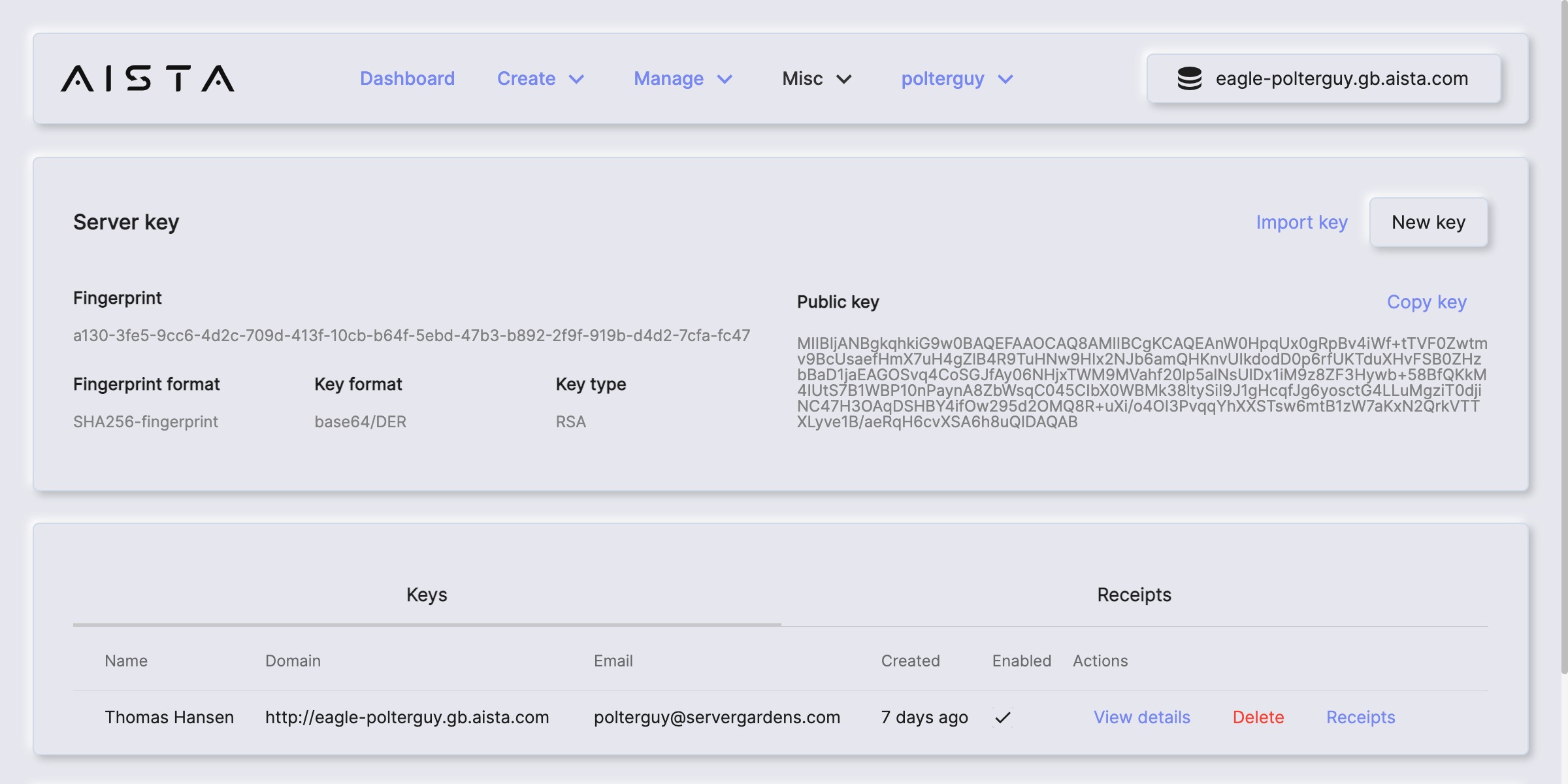 The ID above is the value returned from [guid.new], and simply a randomly generated id associated with your request, created by the client - Allowing the client to persist the invocation. More importantly though, from the server’s perspective, this becomes the equivalent of a “transaction identifier”. Since the id is also a part of the payload itself, and hence a part of the message the cryptographic signature was generated from, this prevents “replay attacks”, where an adversary can pick up your payload, and replay the same payload again. This is accomplished by checking if the [.request-id] part of the payload has been previously executed, and if so aborting the execution, returning an error to the client. To see this in action try to execute the following Hyperlambda twice, and notice how the first invocation typically succeeds, while the second invocation fails.

You might have to change the port number in the above snippet depending upon whether or not you’re running Magic through its Docker images or not.

Magic allows for anyone to import their public keys into your key database by simply visiting your dashboard and clicking the “Crypto” menu items. Importing a public key does not require a user to be authenticated, allowing any random bypasser to import his or her key, but the key will not be enabled before explicitly enabled by a root user on the server where the key was imported. Importing a public key typically looks like the following.

However, after the key is imported it is by default not enabled, implying the user still cannot use it to execute arbitrary Hyperlambda on your server. A root user still needs to explicitly enable the key through the “Crypto” menu item by clicking the “Enabled” checkbox for the specified key as illustrated below. 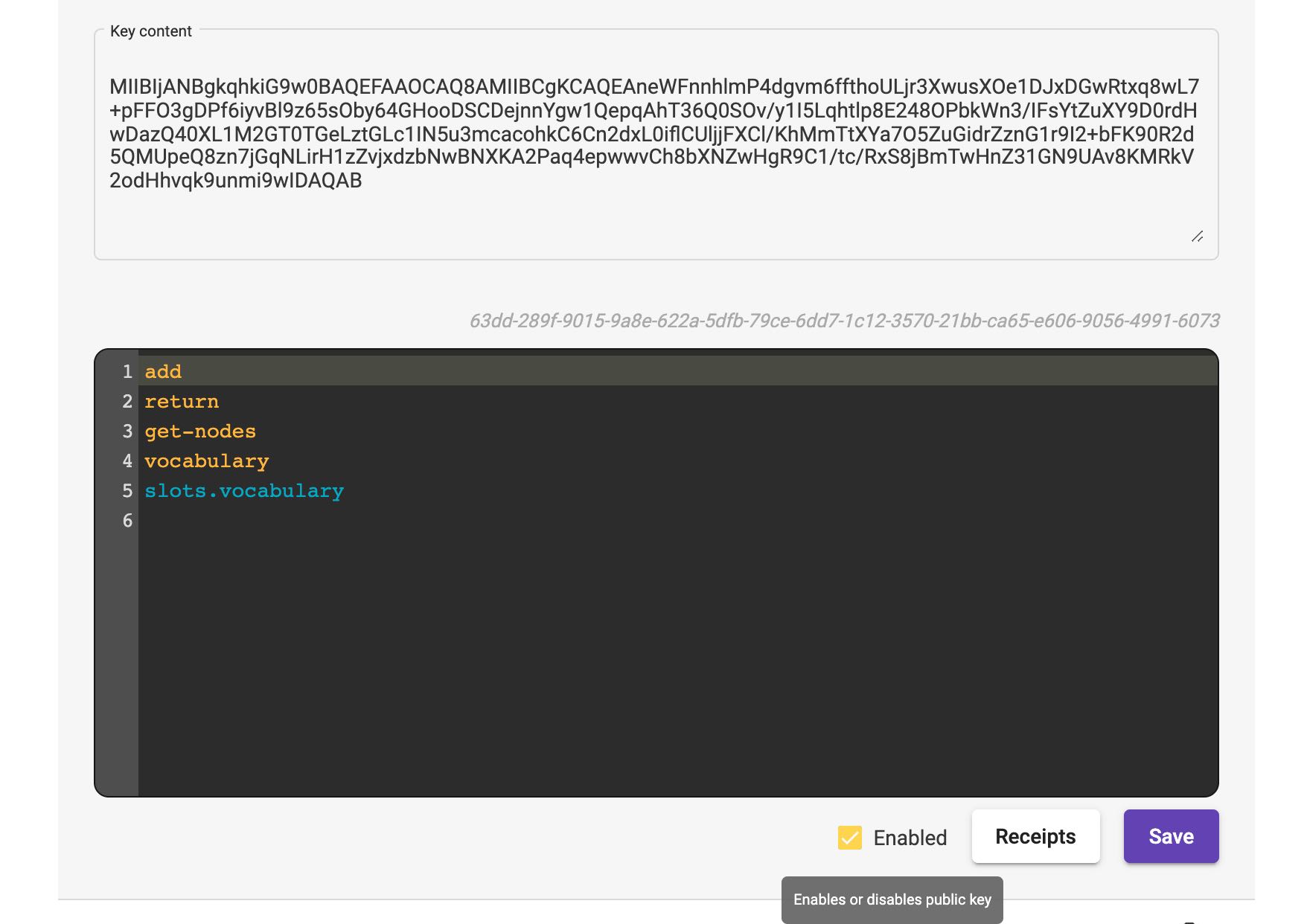 When the key is enabled, the owner of the private key associated with the public key can execute any slot listed in the above CodeMirror Hyperlambda editor, and the owner of the server can add as many or as few slots here as he or she wants to. Which slots a server administrator allows for will probably vary according to his or her trust level on an individual per key based level, but at the very least common courtesy dictates that the slots [add], [get-nodes], [return-nodes], [vocabulary] and [slots.vocabulary] are enabled, since this allows the owner of the public key to invoke the server’s cryptography endpoint and ask it what types of slots it is allowed to pass into the endpoint by constructing some Hyperlambda resembling the first Hyperlambda snippet at the beginning of this document.

Warning - Be careful with what slots you allow others to execute on your server. If you for instance allow for deleting files on your server, some malicious key owner might delete all files on your system - And it might not even be the owner of that server’s fault either, but rather because his server has been hacked by some other malicious adversary, resulting in that the other party’s server starts doing things the owner of that server wouldn’t do in the first place himself.

The endpoint magic/system/crypto/eval-id is encapsulated in the file called “eval-id.patch.hl” that can be found within your “/system/crypto/” folder. The most important tasks this endpoint has are as follows.

The last part above is what prohibits the Hyperlambda from executing slots it is not allowed to execute, since it temporarily changes the behaviour of the [eval] slot, such that only slots found inside of its [vocabulary] argument are legally allowed to be signaled. However, there is one part of this equation you need to be careful with, which is that when a dynamic slot is signaled, the [whitelist] is turned off. Without this feature every slot a dynamic slot is internally using would have to be whitelisted in order to be able to invoke the dynamic slot, which of course would defeat the purpose, and render the functionality useless.

This implies that if a dynamic slot is executing a lambda object specified by the caller, the [whitelist] restrictions can be completely bypassed, resulting in a malicious adversary being able to execute slots he or she should not have access to execute. Hence, as a general rule of thumb, you should never whitelist dynamic slots that are executing lambda objects specified by the caller. Let’s repeat that once more to make sure it sticks.

NEVER, EVER, EVER whitelist dynamic slots that are executing lambda objects specified by the caller

Internally the endpoints, and the associated slot, are using the cryptography slots from magic.lambda.crypto - Feel free to study this project to gain further understanding about cryptography in Magic and Hyperlambda. Also notice that the Hyperlambda payload is not encrypted. This is anyways typically redundant, since for cryptography in HTTP invocations you’d typically want to resort to and trust TLS or Transport Layer Security, and encrypting the payload only adds overhead for the client and server during communication. The point here is anyways not to encrypt data, but rather to ensure data originates from a specific client, similarly to how crypto currency transactions are cryptographically signed, ensuring nobody but some wallet owner is allowed to transfer money from his wallet to some other wallet of his chosing.

The [.request-id] argument supplied as you create an HTTP invocation can be any string. However, it has to be globally unique, implying using a Guid or a piece of text, plus some Guid, or your company name, etc, as the request id is probably smart to avoid having your IDs clash with other clients’ IDs.

In addition to the obvious use cases, such as financial transactions, document signing, legal things, etc - This also allows you to create a micro service environment, publicly exposing endpoints over an insecure connection, such as the World Wide Web - While still providing guarantees of that nobody except those clients explicitly given permissions on your server are legally allowed to provide Hyperlambda code to your server and have your server execute their code.

Since the whole idea also is that the client supplies the code, this also allows your system to go through evolutionary iterations, changing its behaviour, without having to patch or change your servers in any ways, since the client is the party providing the actual code to be executed. Hence, upgrading your client, effectively changes the behaviour of your server. Needless to say, but in a Micro Service environment where you might have dozens, and sometimes thousands of heterogeneous server instances, this approach eliminates an entire axiom in regards to maintaining your system(s) - Simplifying things significantly, since you no longer need to patch your servers, but only your clients.

This feature is incredibly powerful, but it also carries some overhead. For instance, the payloads needs to be cryptographically signed by the client. The server needs to verify the signature and parse the Hyperlambda, building a lambda object from it. Execution rights needs to be retrieved from the database, and a receipt for the execution of the lambda object needs to be persisted into the database. Hence, you should not use this feature for things where execution speed is crucial, but rather smaller payloads, occasionally transmitted between clients and servers, and not for things needing to handle thousands of requests per second. However, when you need such features, you really need it - And if used correctly, and sparsely, this feature is an incredibly useful tool, to both scale out (securely), and more easily build heterogeneous server environments, without having to try to predict what the future might hold in regards to its requirements.