Generate a CRUD API in seconds

This is a “hands on tutorial”, and assumes you’ve already installed Magic locally or at some server. This tutorial covers the following parts of Magic and Hyperlambda.

This is going to be a “different” tutorial, since instead of creating code ourselves, we will use Magic to generate our code, and analyse what Magic did afterwards. If you prefer to watch a video where I demonstrate this process, you can watch the following video.

What Magic just did for us in the above video was providing us with a starting point, from where we can modify the code afterwards. However, in order to modify the code, we’ll need to understand it. So let us walk through it step by step, starting out with the creation of our database, ending up with an understanding of the Hyperlambda code that Magic created for us. 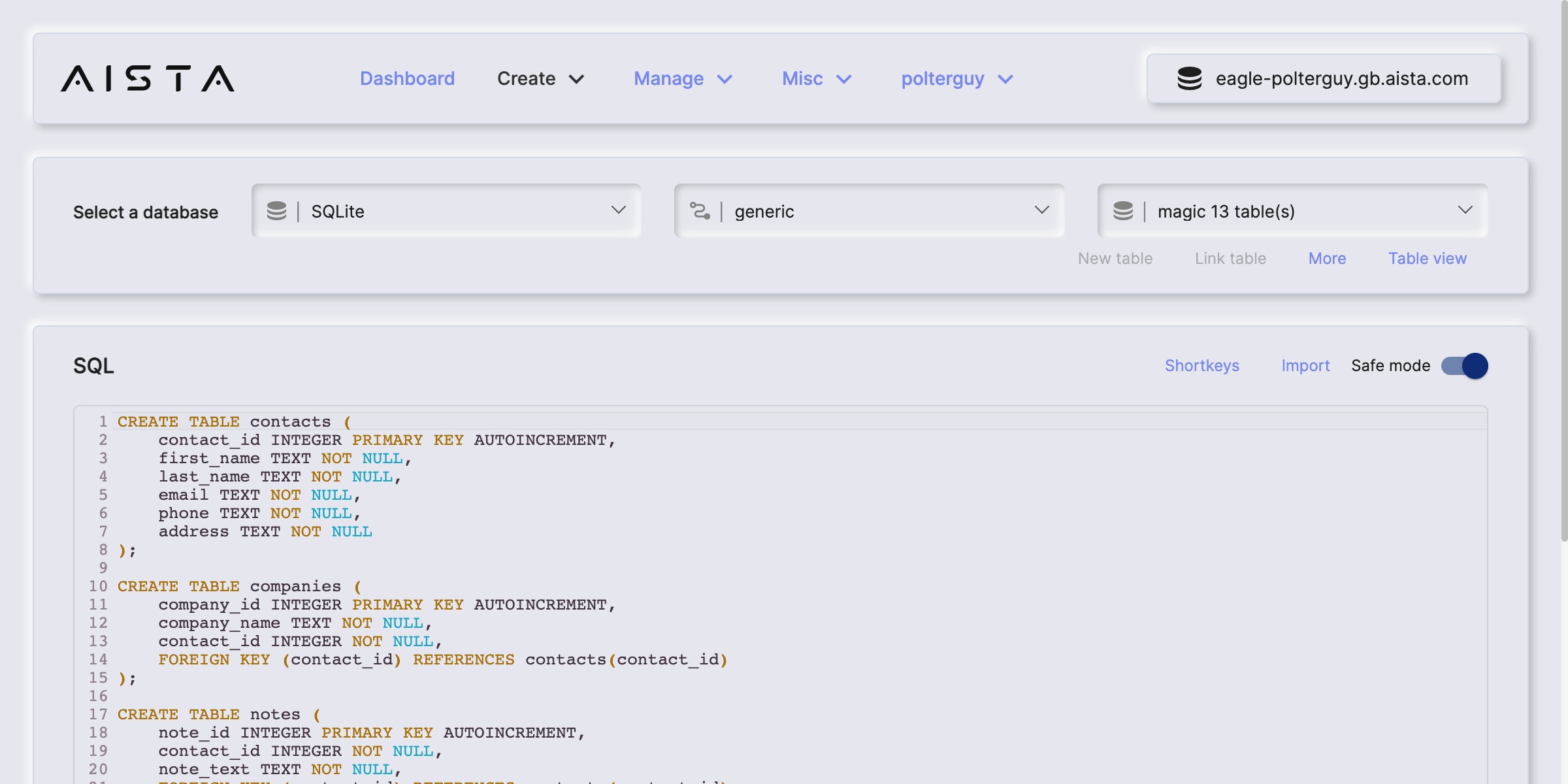 This creates a database for you, which will be the foundation for generating our HTTP CRUD backend.

Before we can generate our backend we will have to purge our database cache. Click the little spiral icon in your SQL menu item beneath the SQL editor. Below is a screenshot showing you how. 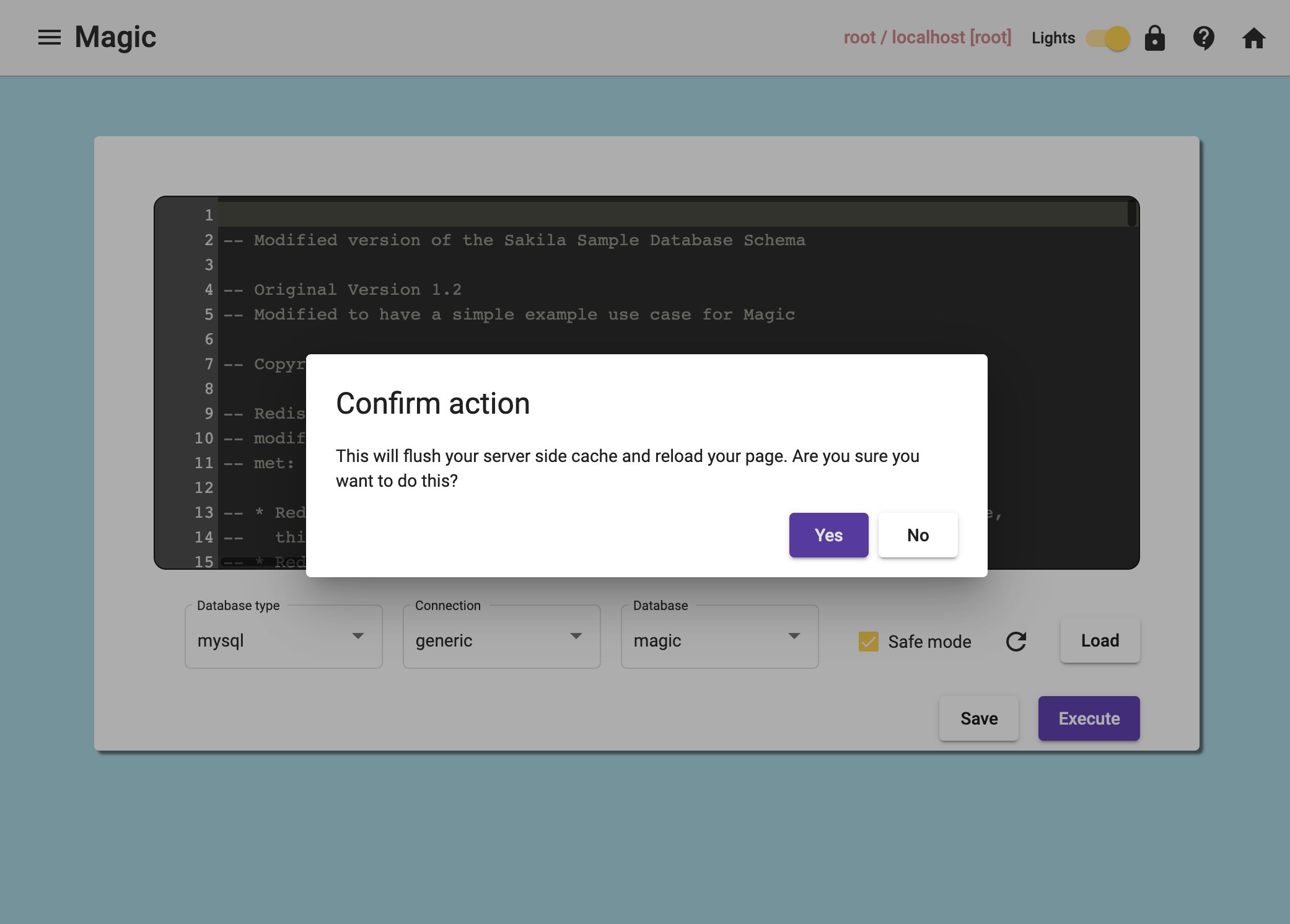 Open the “CRUD” menu item, choose your newly created database, and click “Crudify all tables”. Below you can see a screenshot. 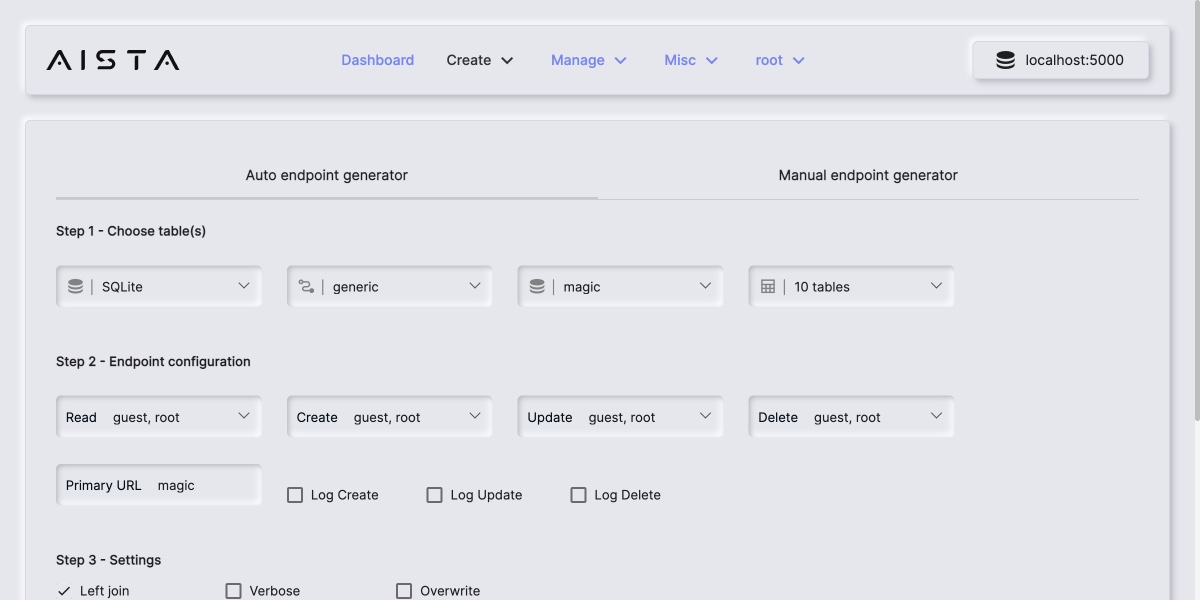 You will have 5 files resembling the above structure for each of your tables in your database. We will study the files generated around one of these tables, but it doesn’t matter which database you generated, or which table you select - The structure will be similar enough regardless of what table you choose. However, before we start looking at the code, let’s play around with the code, by going to the “Endpoints” menu item, and filter on one of your tables. In the screenshot below, we’ve chosen “sakila/actor”. Click the “get” endpoint, at which point you should see something resembling the following. 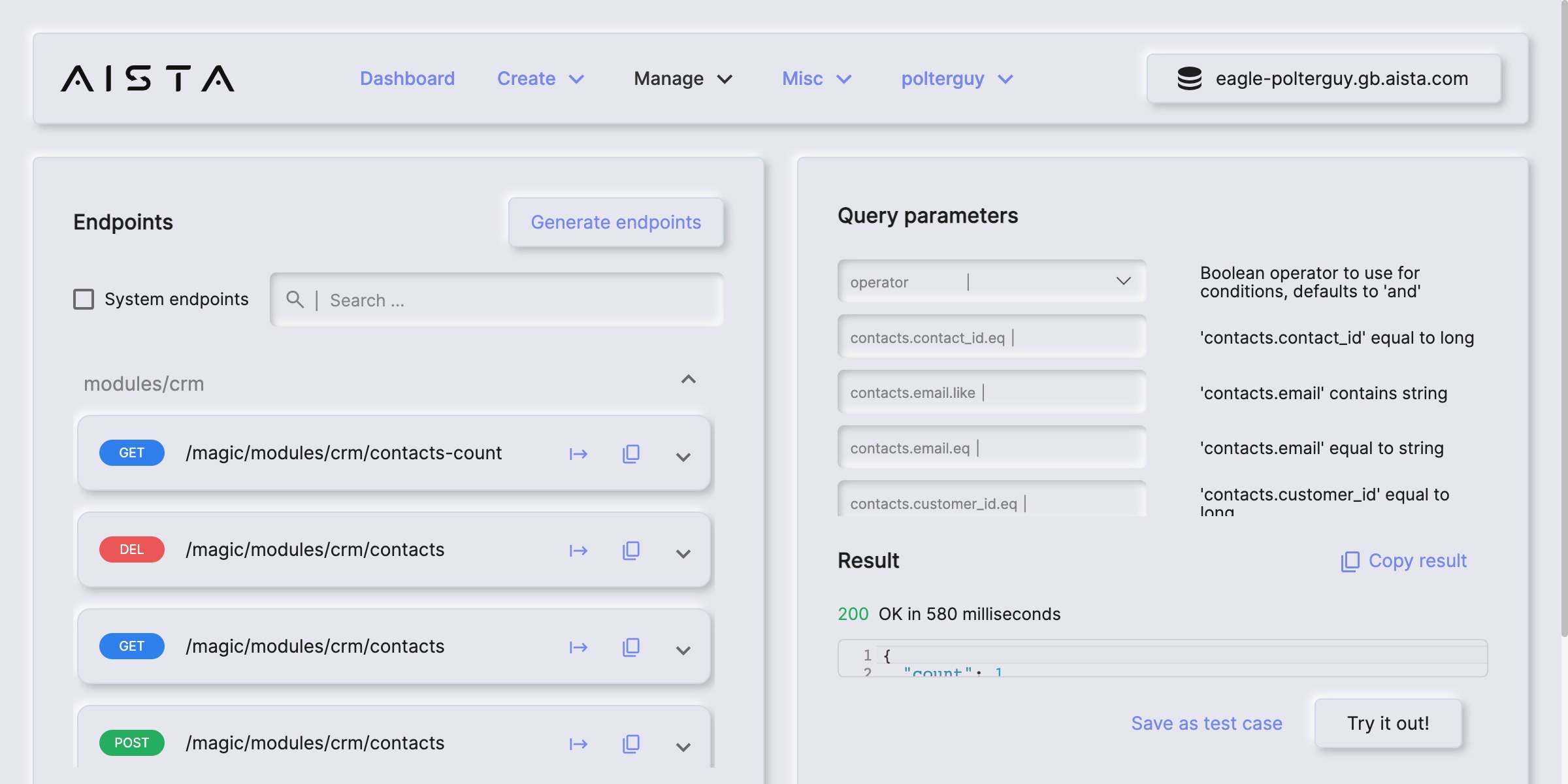 You can already invoke your endpoint by clicking the “Invoke” button for your endpoint. If you do this, you should see a bunch of JSON objects returned from your server resembling the following, depending upon which table you chose.

The read endpoint supports all of the following features.

The above is what you would typically need most of the times as you read items from your database. If you’d like to find items only matching a specific criteria, you can add a filter for your criteria to have your backend only return items matching your filter. You will see a whole range of possible filters for each column in your table such as illustrated for the first_name column below.

Each column will have a range of filter options matching the above comparison operators. If some of your filter conditions doesn’t make sense for a particular column, you can delete these later as we start editing the endpoint’s code. However, try clicking the actor.first_name.like filter button for instance, and add the value “A%” into it, click “Add”, and invoke your endpoint again. This time only items matching your filter condition are returned, such as the following JSON illustrates.

You can combine as many conditions as you wish the same way we added the above like filter. Conditions are by default and‘ed together, implying all conditions must match - But this can be changed to or by changing the value of the [operator] argument.

You can also create and update items if you select your post or put endpoints. However, these endpoints require you to provide a JSON payload instead of parametrizing your endpoint using query parameters. Try to create and update some items using these two endpoints. Just remember that regardless of what table you choose, the primary key parts to the update endpoint is the criteria of which item to update. Magic only creates endpoints that supports updating one item at the time by default - And the generator does not produce code allowing you to change the primary key. For the “put” and “delete” endpoints, the primary key(s) for your tables are also mandatory and you have to supply these, otherwise the backend will return an error to you.

If you go through your endpoints, you will see a lot of meta information. This was generated automatically based upon your database schema, and is also publicly exposed to the client, almost the same way the Open Web API or Swagger is able to enumerate and document your HTTP endpoints. Hence, we’ve already documented our HTTP endpoints, even though we haven’t manually created a single line of code. Magic also creates meta information like this for your manually created endpoints. This meta data becomes crucial as we later start looking at how Magic creates your frontend. You can see this meta information as properties of your endpoint if you go to the “Endpoints” menu item and click any of your endpoints.

Once you’re done playing around with your endpoints, open up “Hyper IDE”. Click the “modules” folder, then click the folder with the same name as the name of the database you generated above. Click for instance the “actor.get.hl” file, at which point you should see something resembling the following. 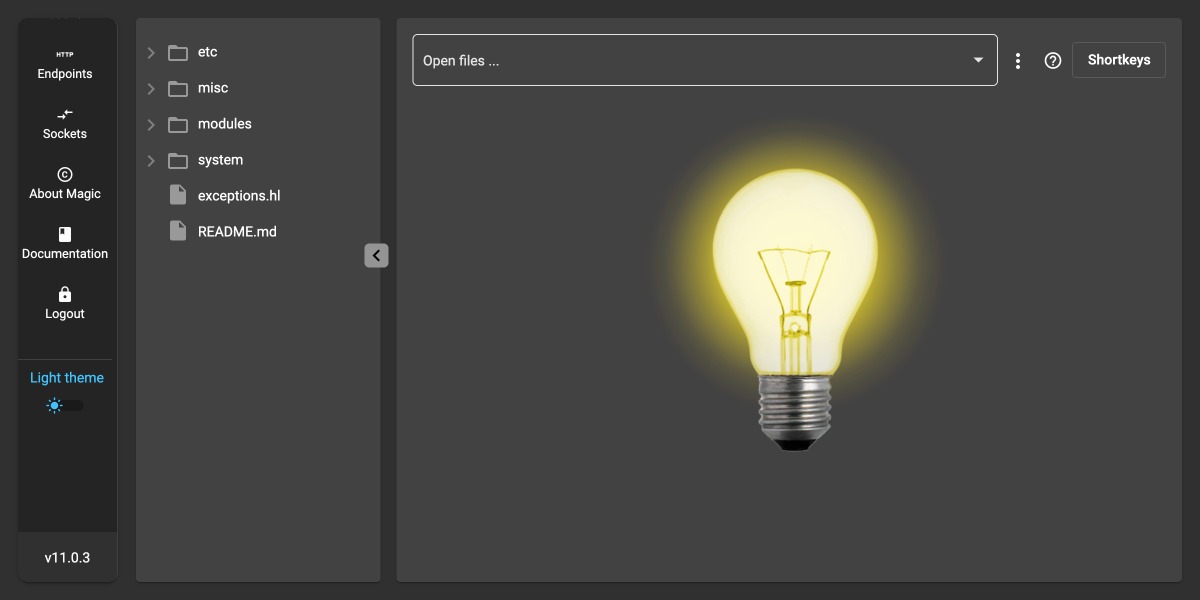 If you didn’t generate CRUD endpoints for your sakila database then at least make sure that whatever file you’re looking at ends with “.get.hl” such that we’re looking at roughly the same thing. What you are looking at now is the Hyperlambda Magic automatically generated for you. The most important part of this code is the following section.

The above invocation to the [data.read] slot is “transpiled” by Magic into an SQL statement, retrieving your records from your database according to your filter conditions. The result of this SQL is then returned back to the client as JSON in the [return-nodes] line at the bottom of your code. The above slot will expect an already open database connection. To open a database connection we use the [data.connect] slot. The following code shows you how to connect to a database.

In the above [data.connect] invocation we are referencing a connection string who’s name is “generic” and we’re choosing to open the “sakila” database in this instance. Since we supply “mysql” as our value to [database-type] this will ensure Magic uses the MySQL connection string named “generic”. You can add additional connection strings to Magic by opening the “Config” menu item from your dashboard and edit your configuration settings.

In Hyperlambda code is always an argument, and all arguments are code

This is why it’s called Hyperlambda, because everything is a lambda object. Hyperlambda is said to be “a functional programming language”. We will go through the exact syntax of Hyperlambda in a later tutorial, but for now realise that in Hyperlambda spaces counts - Kind of like the same way they do in YAML or Python, and 3 spaces declares a “scope”, while a colon : declares the beginning of a node’s value. Nodes again is a tree structure having a value, a name, and children. This is the foundation of Hyperlambda. Hyperlambda is actually just a text representation of a tree structure, the same way YAML, JSON, or XML is. Nodes are Hyperlambda’s object implementation again. See the documentation for magic.node for more details.

Passing arguments to your CRUD API

If you look at the top of your file, you will see something resembling the following.

If you open one of your “xxx.delete.hl” endpoint files in Hyper IDE, you will see something resembling the following just below your [.arguments] collection.

This is a mandatory validator, and makes sure the endpoint cannot be invoked without passing in an [xxx] argument. Hyperlambda contains many similar validators for validating numbers, emails, date and time objects, etc. If you want to see what validators you can use in Hyperlambda, you can checkout the documentation for magic.lambda.validators. You can also use the autocomplete features of the Hyperlambda editor, by finding an empty line and click FN+CONTROL+SPACE on a Mac or CTRL+SPACE on Windows. This will show you the autocompleter for Hyperlambda slots, allowing you to filter on for instance validator slots, such as the following illustrates. 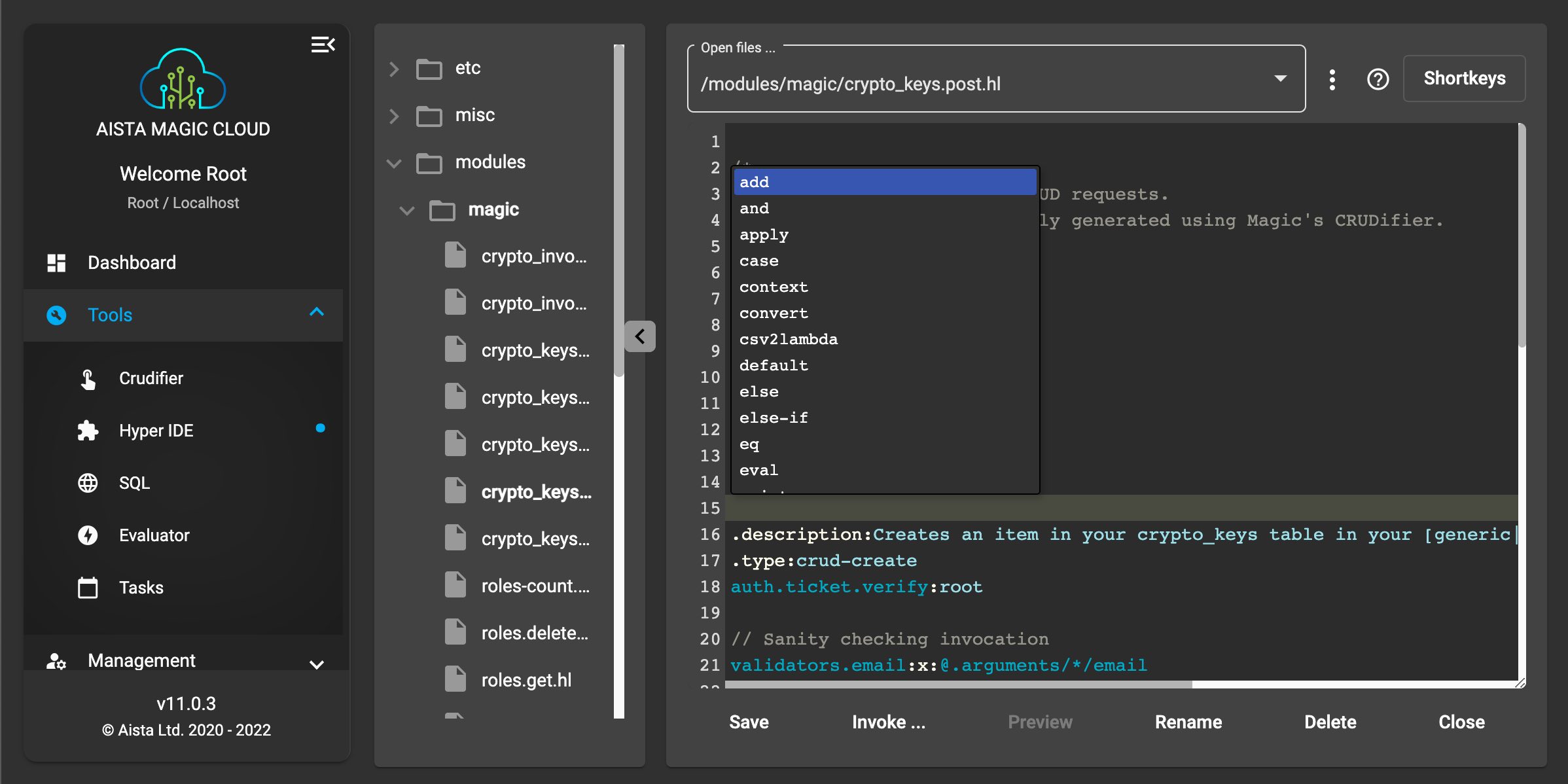 Your endpoint will by default require authentication and authorisation, preventing anonymous users from accessing it. This is done with the [auth.ticket.verify] slot with something resembling the following.

The above line of code verifies that your JWT token is valid, and that the user invoking the endpoint belongs to at least one of the following roles.

If the user has an invalid token, and/or the user doesn’t belong to any of the above roles, this slot will throw an exception, preventing the rest of your Hyperlambda code from executing. This is the core authentication and authorization parts of Magic, and allows you to secure your CRUD API. If you want users belonging to different roles to be able to invoke your endpoint, you can simply edit the above code, by for instance adding another role to it, save your file - And voila; Your authorization requirements have automagically changed. Below is an example of how to add the “director” role as a role allowed to invoke the endpoint.

The above slot requires a comma separated list of roles as its input. You can also completely remove the above node’s value parts, resulting in that any authenticated user can invoke your endpoint, as long as he or she has a valid JWT token. This completely ignores the roles the user belongs to, as long as the user is authenticated with a valid JWT token. Below is an example.

The rest of the file basically just provides meta information to the endpoint resolver, and correctly parametrises your invocation to [data.read] - However, this will be a subject of a later tutorial. If you’re curious about how this work, you can check out for instance the [add] slot in the documentation for magic.lambda.

An invocation to for instance [data.read] is referred to by Magic as a “slot invocation” or a “signal”. A “slot” is kind of like a function, and a “signal” is kind of like a function invocation. However, fundamentally Magic doesn’t have “functions” the way a traditional programming language has, which is why we refer to these as signals and slots. If you view your other CRUD files, you will see that they are using slightly different slots to wrap other CRUD functions. The basic CRUD operations in Magic are implemented with the following slots.

Besides from using different slots, all of your generated Hyperlambda files are actually quite similar in structure. You still typically want to have separate files for these operations, since this allows you to easily modify for instance authorization requirements, arguments passing, add additional business logic to your files, etc. So even though the code is not very DRY in its original state, separate endpoint files for separate operations are still typically useful, and a feature you will appreciate further down the road. If you want to see the power of these CRUD slots you can check out the documentation for the magic.data.common module that you can find in the reference documentation for Magic.